I have heard the second fact used as an excuse not to tweet, blog, and otherwise communicate in Spanish, but when you do the math, that would ignore more than 20 million Americans, up to 40 million depending on the context.

I have also heard the excuse of not being located in an area where Spanish speakers live. Where, exactly are the tens of millions of Americans who speak Spanish at home? Everywhere:

Americans who speak Spanish at home, map and data via the Census Bureau.

As a result, I have made a special effort to connect with Spanish speakers at @OKFNUS on Twitter. How are we doing? 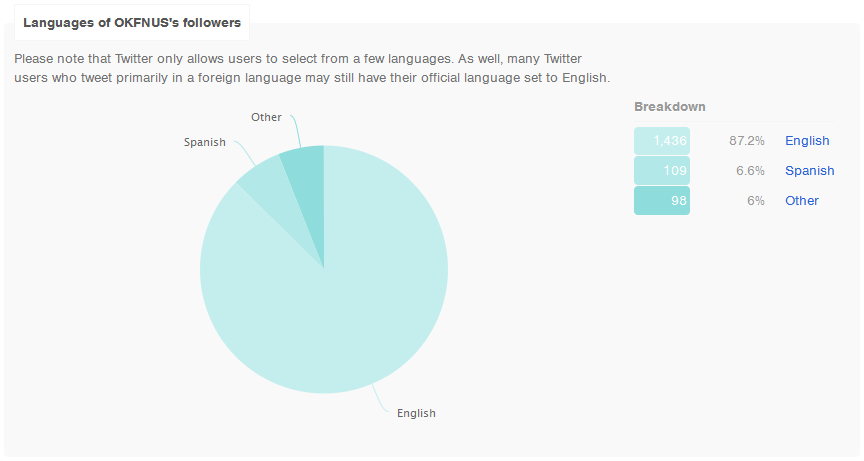 Not bad. Here in August 2014, more than 100 of our 1650 Twitter followers have set their official language to Spanish, a strict test for whether they are Spanish speakers. The percentage who speak Spanish is undoubtedly higher than 6.6%, but to know for sure would be difficult, for example we might text mine our followers’ tweets.

Not bad, but I am confident we can do better with a larger, more diverse team of Ambassadors. Diversity must also be a core value in our future national chapter for Open Knowledge in the US. 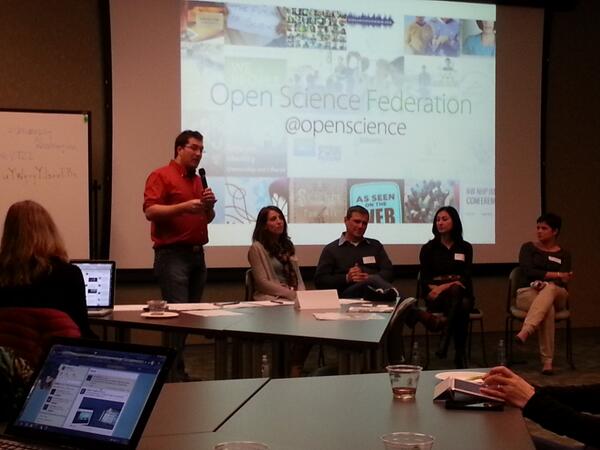 Recently in my work in Open Science, I had an idea for a panel discussion on engaging Spanish speakers in the US. I could have led the event, but instead I gave the idea to an Hispanic colleague who is fluent in Spanish. He organized and moderated a much more insightful and effective discussion than I had imagined.

As a next step, we should recruit at least one fluent Spanish speaker as an Open Knowledge Ambassador in the US. Language and the cultures inherent can be a significant barrier to opening knowledge, one which partnership is essential to resolving.

Reaching Spanish speakers is just one of our many needs for greater diversity. First of all, Americans speak many languages beyond English and Spanish.

Where I live in Seattle, government documents and services are available in Burmese, Cambodian, Chinese, English, Korean, Laotian, Russian, Somali, Spanish, Tagalog, Tigrigna, Ukrainian, Vietnamese, and sometimes more. Most of the people in Seattle are from somewhere else, and the next generation is even more diverse. Students in Seattle public schools are native speakers of 120 languages, and there are 47 languages in which at least one class is taught.

The prominence of specific languages and cultures varies significantly across a country of our size. Seattle may be more diverse than many cities, but being officially multilingual is not the exception in America. It is typical for our cities and states to offer documents and services in multiple languages. That’s good and open governance.

As activists for Open Knowledge, we must aspire to be more open than the government and society we mean to improve. In a country like the US, where openness has already had so much success, the standards for being more open are then very high.

Not only that, but our Open Knowledge US Ambassadors lack diversity in many aspects, beyond language. To mention just a few: we lack for women Ambassadors entirely, we are distributed geographically but we are too few for a country of this size, and there are many aspects of, or disciplines within Open Knowledge for which we lack a dedicated Ambassador. 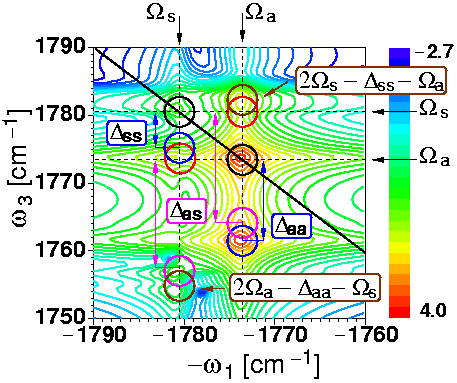 I cannot say when we will have 100 Ambassadors who speak 100 languages, but take heart. “Open” is not something one is or is not. I have said before that Open is a spectrum; if that is a good metaphor, then Open is a highly multidimensional spectrum.

Open is an ideal to which we aspire.

This is not exactly the official Open Knowledge line, after all we have an official Open Definition and in cases such as policy it is important to define Open. But my personal take is: be less concerned with whether knowledge is open, and more concerned with how it can be more open.

And keep opening it. As from Wendell Berry’s essay on What are People For? —

“Seeing the work that is to be done, who can help wanting to be the one to do it?”