The following, one minute of 2013 highlights at @OKFNUS on Twitter gives a glimpse at our 1500+ tweets posted and 750+ friends made.

That’s OKF NYC Ambassador @LaneRasberry on the right side of the cover shot, quoted saying “Wikipedia is what the world is reading” at #WikiNLM at the NIH, May 29 2013.

The video features three with whom we interacted most — @OKCon, @openscience, and above all @OKFN, and three hashtags we hit most — #openscience, #opengov, and most of all #opendata.

Also featured are a few representative tweets, but do note that our range includes #openGLAM, open access scientific publishing and Wikipedia, open source software and hardware and hackathons, data driven journalism, open education, the public domain, and still more. We cover everything @OKFN do, just with an American eye and more US-based content. 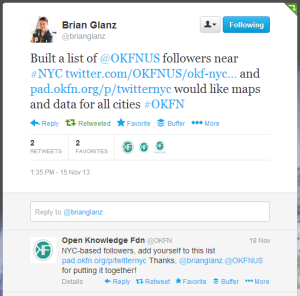 I had remixed source video from https://www.vizify.com/okfnus back in December, and polished it this week with some public domain media. To give the video a good home, I created a YouTube Channel, a Google account (okfnus@gmail) to eventually share management of the channel with my OKF colleagues in the US, and a Google+ Page.

One of the spin-off projects I began at @OKFNUS was a Twitter list for NYC area accounts. I started with 30 accounts in November and it is now over 40, see the full list and back story at http://pad.okfn.org/p/twitternyc. As in my tweet shown here, I would like that on a map, with open data, and for all cities… to be hacked upon at a hackathon?

There are many moving parts in setting oneself up for what the pros call ‘cross channel marketing’, in social media and in concert with our web site. Creating graphic art, placing and editing code embeds, writing copy, linking each to the others; it has taken me over a week of spare time to weave the web at YouTube, Google+, et al.

Next steps include meeting with my fellow account managers, and perhaps setting up an editorial calendar or divvying up responsibilities. I’ve been the only hand at the @OKFNUS till, but not for much longer!

A key goal in setting out was to be a steady, dependable and growing voice for OKF in the US. I publish a minimum five tweets every day and eight on average, evenly spaced across the six or seven hours of American timezones, regional interest tweets timed appropriately.

The voice of OKF in the US is about to become more of a chorus. I look forward to sharing the accounts with my fellow US Ambassadors!