Below are some tales and details from the first 1,000 tweets. Going forward, expect more of the same at @OKFNUS — plus! more from other US Ambassadors and representatives of the Open Knowledge Foundation. I look forward to sharing tweeting duties as our numbers grow.

I will not get to everything interesting about @OKFNUS in this one blog post, but I hereby swear to write up a few major events. It was an eventful time, from local OKF hackdays and meetups, to a trip to the White House, DEF CON in Vegas and Wikimania in Hong Kong, and of course #OKCon in Switzerland!

We have managed to attract over 500 followers, but what has happened on the whole, over the first 1,000 tweets? Have they been like 1,000 pebbles on a path to Open Knowledge?

A brief word from the Art Department 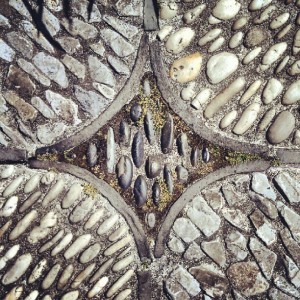 Pebbles in a path at the Lan Su Chinese Garden in Portland, Oregon. photo CC0, by Brian Glanz

Well if I’m going to be poetic, I might as well try poetry:

One hundred forty steps, to steps, on a path with one thousand pebbles.

One issue with that — it’s a Japanese-like poem to match a photo I snapped, shown here from a Chinese-like garden. At least it’s a bit better than the straight metaphor :)

Tweets are short and the idea is, sweet. Tweets may be easy, but good tweets take work. You need to be real and hip to the internetz, but professional and quick with research. Merciless brevity and instant, global reach require tact and sometimes poetry.

How did I get into this?

I’ve used Twitter for seven years, and have published over 20,000 tweets total at the eight accounts I manage. I am @brianglanz but most accounts I share with others. I have enjoyed being the voice of @OKFNUS, but I prefer to share!

I have volunteered with OKF in various projects, events, and working groups for over five years, and am particularly keen on open science, government, and journalism. (I started @openscience on Twitter.)

I am also an open source web developer. I have built well over 100, probably over 1,000 web sites. I have volunteered now and again to improve OKFN.org and its network, which includes us.okfn.org and I first put this site together for the US. Working on someone’s web site gets you all up in their business. It was this and of course the mission of opening knowledge that brought me closer to OKF.

I registered the @OKFNUS Twitter account in November, 2012 but did not make use of it until May, 2013. My fellow organizers and I did not want to begin acting as OKF representatives in any official regard until we had a green light!

Once we had that, I set a few standards for the account. For example, I publish at least five tweets per day, spaced fairly evenly and with an eye toward timezone-relevant content. I generally tweet during waking hours in at least one US timezone.

There are exceptions, like that I finally took one day off — yesterday! I used the time to draft this post about the first 1,000 tweets, to announce it with the 1,000th tweet. I can be particular.

Ours is a big country

In the first week I began using @OKFNUS, I was considering what to cover. I thought to myself, “covering hackdays might be nice.” OKF have brilliant code and projects, I could chime in remotely and volunteer support. In fact many US hackathons make use of OKF bits, including many I have organized, with projects from CKAN to PyBossa to the Public Domain Review.

Great idea, then! I found, however that within just the first week I was tweeting at @OKFNUS, there were more than 100 hackathons in the United States. That was a few more events than I had planned to tune into, per week, as a volunteer voice of OKF :0)

Ours is a big country. I did tune into many hackdays, though in that week and in the nearly six months since. I joined and organised some, too, including an August “Open Science Hack Night” for OKF in Seattle. I will write more about events in future posts, and about noteworthy Twitter exchanges, and how we measure impact.

One more note before closing with some pretty pictures: to wrap my head around the OKF community on Twitter, and to serve us all as well, I began a list of every official OKF account. Every account, that is except one: @OKFNUS! Because I used @OKFNUS to create the list, and one cannot list oneself, @OKFNUS is not on the list.

I call it “One list to find them… and in the open bind them.” I know…

To listen as I do, then to OKF on Twitter, tune into this one list, plus! follow us @OKFNUS. It currently includes 158 staff, projects, groups, etc. — https://twitter.com/OKFNUS/lists/okf — and I crowdsourced it. Read more at http://new.okfnpad.org/p/twitter.

Until I write more blog posts, enjoy this data visualization with maps of our followers. The maps link to larger, legible versions. Below them is a downloadable archive of our first 999 tweets, should anyone want to kick around the #opendata << of course.

Note that for many Twitter accounts, location is unknown and distribution is highly approximate at distance. For example, we have followers in Germany but when zoomed this far out, they appear to be in London.

Ohai, London! there is a good number, there per OKF Central. We have some followers on every continent, not many but it’s a start.

Below the global map is a closer view of the US. From this global distance though, we see the Eastern and Western US follow @OKFNUS in about the same numbers. When you include Alaska and Hawai’i as Western, we have just 10 more followers in the East, out of more than 300 total that we know are in the US.

In the US map below, it’s nice to see someone in Alaska, someone in Puerto Rico, and seven people in Hawai’i. At a closer range, you would again see more even distribution than is apparent. For example, not everyone mapped to Chicago below is actually there, some of them are as far away as Ohio.

In the West, we might have a few more followers in the Pacific Northwest than in California, with more near Seattle than Portland and more in Northern than in Southern California. 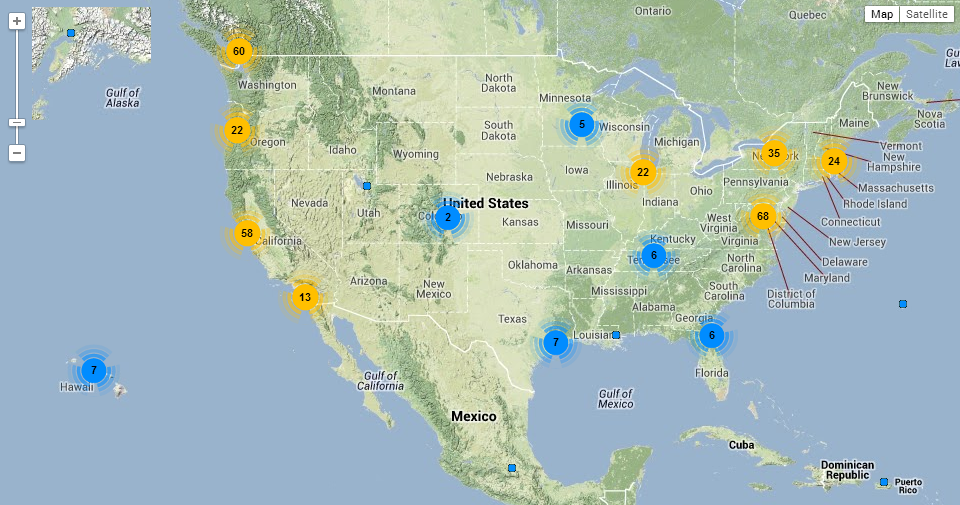 Download our Twitter archive, here. Can a brother get a word cloud? I promise more analytics and analyses in other posts.