An August night went from beautiful to brilliant when roughly 50 people came together for lightning talks, mingling, beer and Open Science hacking in Seattle. 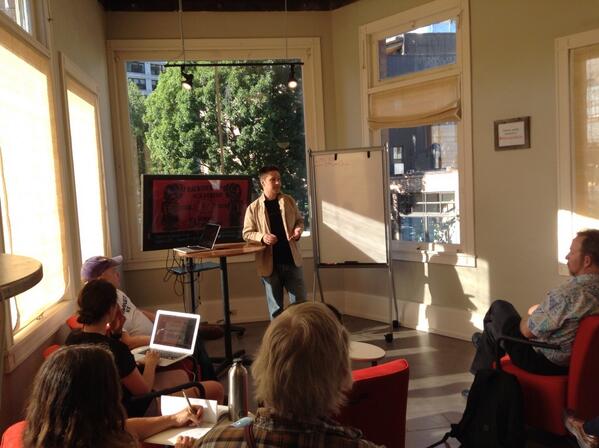 That’s me @brianglanz, welcoming everyone.

Given the summer timing, I had lined up several cohosts for the event, and I had stressed that no technical or science background was required to attend. Each host brought some of their own — there were civic hackers from Code for Seattle, scientists and science communicators from ScienceOnlineSeattle, and hacktivists of all sorts from local enthusiasts of the Open Science Federation and Open Knowledge Foundation’s Seattle meetup.

The night’s main speaker was Célya Gruson-Daniel, co-founder of HackYourPhD who also provided the refreshments. After I opened the event, Célya introduced Open Science, HackYourPhD, and HackYourPhD aux States, the project which brought her to Seattle. She is based in Paris and has been touring the US, producing a web documentary of the American Open Science community — track her progress at http://hackyourphd.org/USA.

UPDATE: Célya has storified her week in Seattle, where she interviewed researchers, funders, hackers, journalists, startups… even me! Check it out, and do listen to some of the interviews. The hack night was at the end of the week.

We kept public notes in the OKFNpad with which we had planned the night, at http://okfnpad.org/2013august7seattle. Projects included:

This local event was also made possible with the support of our parent organizations, Code for America, the Open Knowledge Foundation, and ScienceOnline. Thank you!